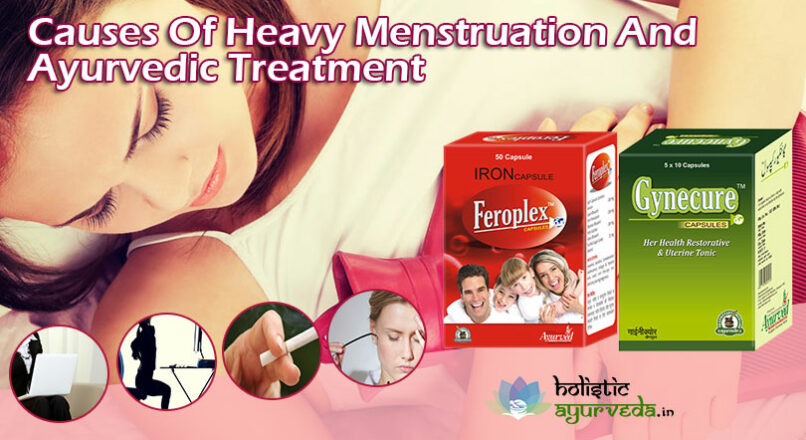 Heavy menstruation or menorrhagia is commonly found problem in fertile women. This causes such heavy bleeding that urges a woman to change pads or tampons every couple of hours. This is not a condition which is marked by longer duration of bleeding, but by excessive bleeding much more than normal. Irregularity in periods is one of the causes of heavy menstruation. Irregularity in periods can cause delays and women bleeding much later than actual date can face excessive bleeding. Hormonal disturbances are major and most common causes of heavy menstruation. Woman having higher level of progesterone hormone or low level of estrogen can face heavy bleeding. Progesterone hormone triggers contractions in uterus to begin shedding of endometrium. In case of higher progesterone these contractions can be quick and vigorous which can cause sudden and excessive bleeding.

Once menstruation is over, egg comes out of ovaries and sticks over endometrium of uterus ready to be fertilized. Once egg is out in the uterus, formation of endometrium stops but in case of women having hormonal problems, the formation of endometrium continues even after ovulation or egg’s arrival in uterus. Such women face excessive bleeding and this condition is another one of the popular causes of heavy menstruation. Excessive estrogen presence is also one of the well-known causes of heavy menstruation. Women having high level of estrogen do not bleed at proper date or have scanty periods as uterus does not begin timely contractions and shed endometrium. Such women have menses later than the proper date which generally causes heavy bleeding.

Spotting between periods due to improper uterine contractions or other reasons cause change in date of menses. This change in date can bring excessively bleeding periods. Conditions like uterine fibroids, cysts in ovaries and PCOS are other commonly found causes of heavy menstruation. These conditions cause drop in level of estrogen before periods and promote vigorous contractions to cause heavy bleeding. Health issues like anemia, anorexia and thyroid malfunctions are also responsible for causing menstrual problems and in many cases can cause occasional or frequent periods with excessive bleeding.

Stress, strenuous lifestyle, heavy exercises, sleeplessness and use of anti-depressants, corticosteroids and diuretics, etc., are other factors, which jumble menstruation and cause irregularities to promote heavily flowing periods. Women who have undergone surgeries during pregnancy or have given birth to a child through caesarean measure can have excessively flowing periods due to strain caused to internal organs. In few cases this issue subsides on its own but in many cases it needs proper treatment.

For more on menstruation, check out:

Ayurvedic treatment for heavy menstruation suppresses symptoms of menopause, which cause discomforting symptoms during menopausal phase and cause frustration to a woman. Women not eating proper diet and suffering with deficiencies also suffer with menstrual irregularities. These irregularities bring heavily flowing periods few times every year and further aggravate symptoms of weakness. Ayurvedic treatment for heavy menstruation treats the causes of the problem such as anemia, iron deficiency and poor enzyme activities, etc., too effectively and maintains regular menses.

Ayurvedic treatment for heavy menstruation curbs toxin presence in body. Women in habit of alcohol intake, smoking, drug use, taking medication for treating any disorder or using ITC for gaining sleep or birth control accumulate lots of toxins in their system. These toxins can throw hormonal levels off-balance frequently. Toxins also cause severe damage to vital organs and reproductive organs of a woman’s body. Herbal remedies for heavy menstrual bleeding eliminate toxins from digestive system and blood and keep hormonal fluctuations under control. Ayurvedic treatment for heavy menstruation also brings sound sleep and keeps energy levels higher. This removes deficiencies and produces energy in higher amount to prevent stress and keep a woman active and energized. These are immensely beneficial for maintaining healthy immune system functions and work as potent remedies for cleansing liver and kidneys.

Women suffering with frequent UTI and other kinds of infections and allergies can provide immense relief by using these herbal remedies for painful periods. Gynecure and Feroplex capsules are purely herbal preparations, which make them suitable for women of all ages. These can be used without any medical prescription and cause no side effects even after regular and prolonged use.

For more on menstrual disorders, check out: